The 10th Review Conference of the Nuclear Non-Proliferation Treaty (NPT) opened on Monday August 1 with a stark warning from UN Secretary-General António Guterres.

"From the Middle East and the Korean Peninsula. To Russia’s invasion of Ukraine.The clouds that parted following the end of the Cold War are gathering once more", he told leaders, ministers and ambassadors of nuclear-armed, allied and non-nuclear countries, along with civil society representatives gathered at the UN for this 4-week long event.

"We have been extraordinarily lucky so far. But luck is not a strategy. Nor is it a shield from geopolitical tensions boiling over into nuclear conflict. Today, humanity is just one misunderstanding, one miscalculation away from nuclear annihilation." 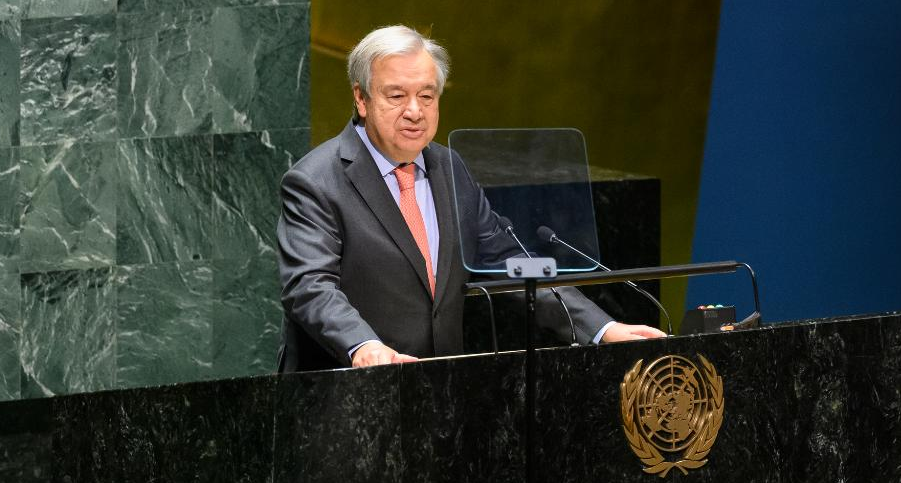 播放器加载中....
Mr Guterres called on the States Parties to use the opportunity of the NPT Review conference to reinforce the norm against any use of nuclear weapons, adopt practical measures to reduce the risk of nuclear war, strengthen all avenues of dialogue and transparency, and return to the path of nuclear disarmament.

Fulfil the NPT: From nuclear threats to human security, an Open Letter organised by NoFirstUse Global, will be presented to the afternoon plenary session of the NPT Review Conference tomorrow (Friday August 5, New York time) by John Hallam, a member of the NoFirstUse Global steering committee.

Over 1400 political, military and religious leaders, as well as legislators (parliamentarians and mayors), academics, scientists, business leaders, youth, lawyers, artists, Nobel Laureates and other representatives of civil society from 80 countries have endorsed the Open Letter, which calls on the NPT States Parties to:

A pre-view of the Open Letter, including a categorised list of endorsers, is available to view or download as a PDF file.

“Nuclear weapons threaten current and future generations. They cannot resolve the conflicts between countries, and they are counter-productive to the human security issues of today and tomorrow – the COVID pandemic, climate crisis, food security, cybersecurity, and achievement of the sustainable development goals. It’s time to fulfil the NPT and the goal established by the UN in 1946 to eliminate nuclear weapons globally.”
Maria Fernanda Espinosa, Member of the World Future Council, President of the 73rd UN General Assembly. Endorser of the Open Letter FulFil the NPT: From nuclear threats to human security
NoFirstUse Global working paper to the NPT
NoFirstUse Global has submitted a working paper to the NPT Review Conference entitled No-first-use of nuclear weapons: An Exploration of Unilateral, Bilateral and Plurilateral Approaches and their Security, Risk-reduction and Disarmament Implications.
We encourage you to read the paper in order to learn more about no-first-use policies and options, how they can contribute to nuclear risk reduction and disarmament, and how this could be taken forward by States Parties to the NPT.
The key ideas and recommendations in the working paper will be discussed in more detail at Nuclear Risk Reduction – More Topical than Ever, an NPT side event at the United Nations in New York on August 19th. No-first-use policies can defuse nuclear risks and keep the goal of nuclear disarmament alive
“Ukraine will not be the only hotspot in this new Cold War, which raises nuclear tensions and increases the risk of escalation and/or miscalculation touching off nuclear war… What steps can we take to lower nuclear risks now? We can’t allow aggression with impunity — but if Russia (and China) return to Cold War-type geopolitics, we also can’t risk a return to Cold War nuclear politics.”
“First-use options are literally playing with fire in very combustible situations. No-first-use policies could defuse these risks and help keep alive the NPT goal of eliminating nuclear arsenals.”
Ambassador Thomas Graham,  Head of the United States Delegation to the 1995 NPT Review and Extension Conference; and General (ret.) Bernard Norlain, former Air Defense Commander and Air Combat Commander of the French Air Force. Endorsers of the Open Letter FulFil the NPT: From nuclear threats to human security. See Russia, Ukraine and Nuclear Weapons: How to address rising nuclear threats – including through no-first-use annoucements.
back to top